0
SHARES
ShareTweetWhatsappGoogleLinkedinTelegram
The year is coming to an end, and we can see more and more platforms focusing on the word of the year, ‘privacy’. From Twitter hiding tweet replies to users, Facebook allows brands to control ad placements, to Facebook removing the option to add friends in live-stream and Instagram testing a new layout for IGTV, this month saw diversity in the type of changes. Take a look at the new things in digital on various digital media platforms for the month of November.  Also, if you missed the October month’s update, take a minute and check them out.

#1. Google Merchant Center Updates Rolling Out Ahead of Holiday Push 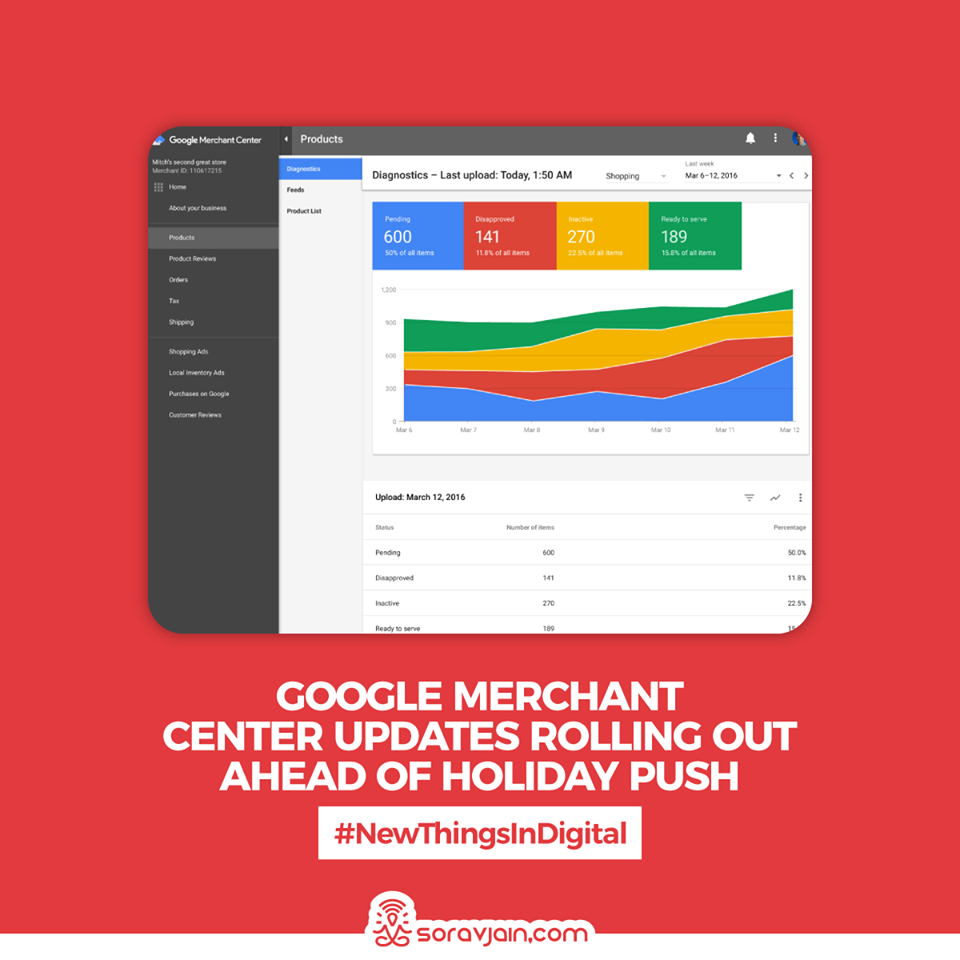 Google is out with its holiday updates for merchants. The company recently rolled out interface and navigation updates for Google Merchant Center. On Wednesday, Google announced a number of new and updated features aimed at simplifying the process of getting your product information on Google properties for the holidays. 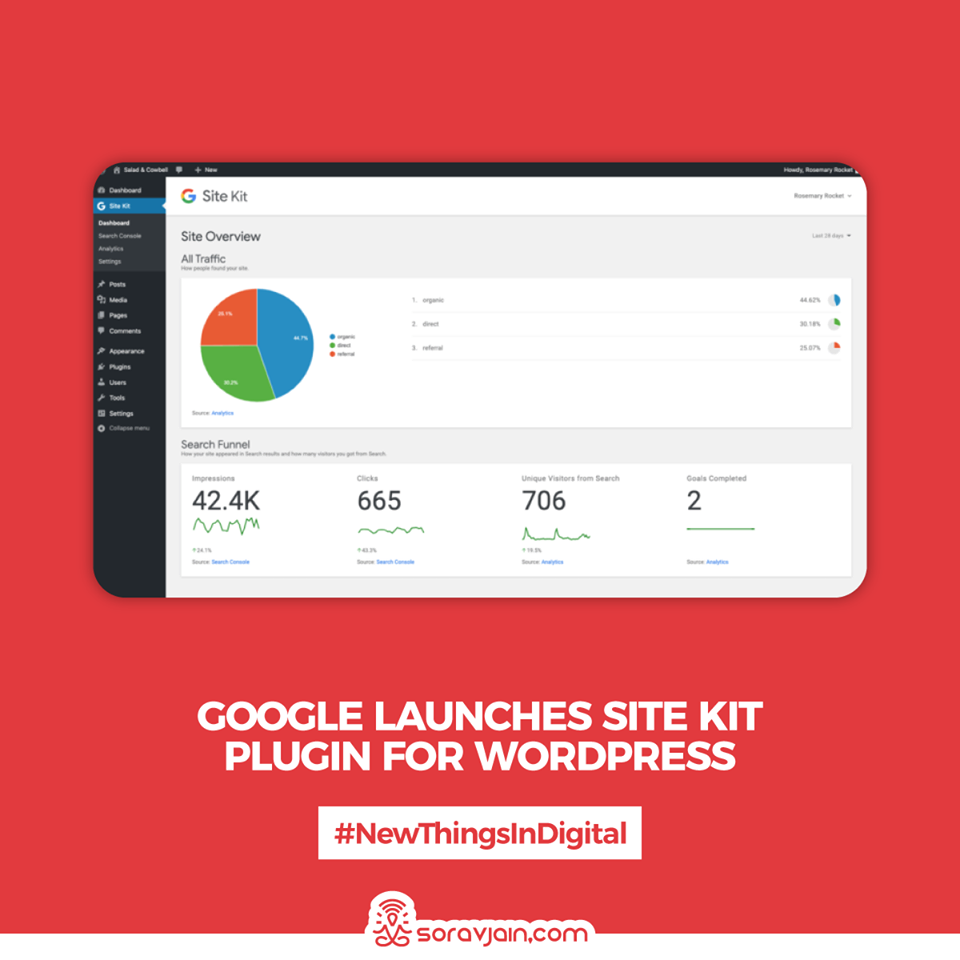 Google announced that Site Kit is available globally for WordPress users. What is Site Kit? Site Kit is a WordPress plugin that allows users to set up and configure Google services to get insights into their WordPress dashboards. Users can see stats from Google Search Console, Google Analytics, PageSpeed Insights, AdSense all in one place. 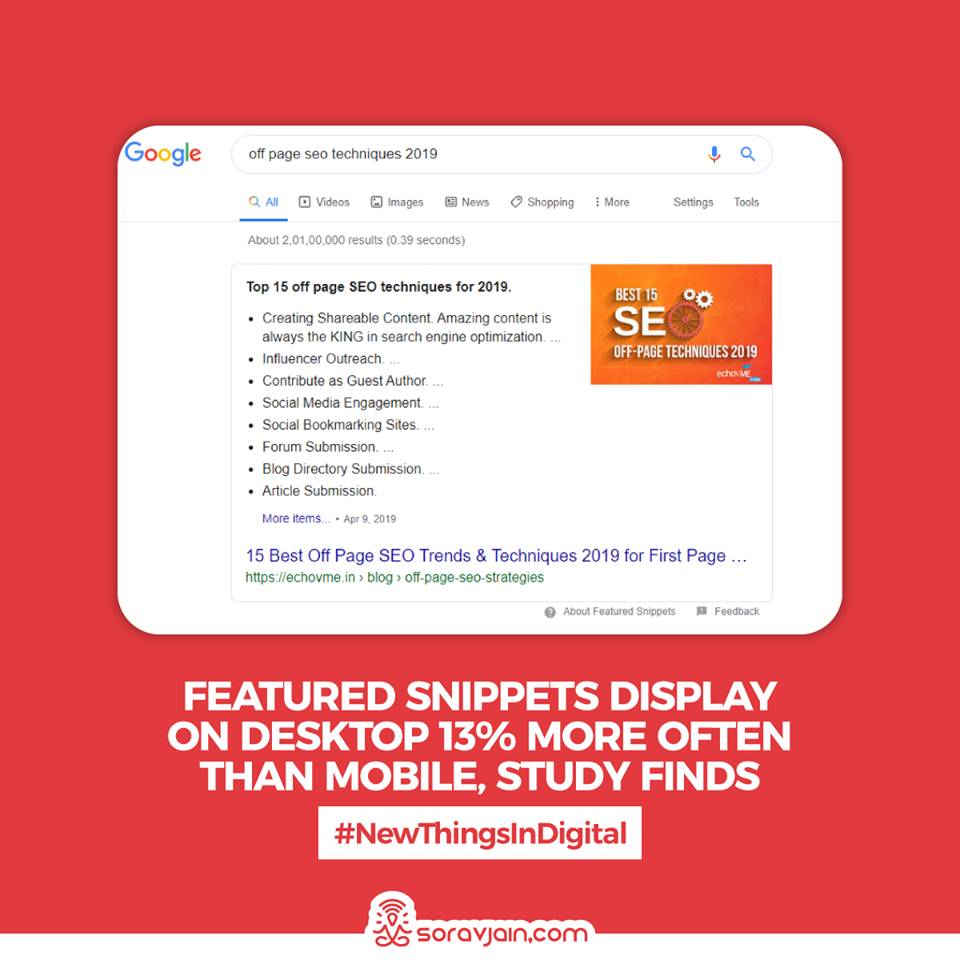 Google showed featured snippets on desktop 86.6% of the time compared to 73.3% on mobile, according to a 30-day study conducted by Rank Ranger. Cross-posting has become an increasingly common stories trend, and many brands, in particular, have adopted cross-posting to their Facebook Story as a means of easy amplification of their Stories content. But having to remove content from each platform can be problematic. To make this easy, Instagram is testing out a new option that would enable users to remove their Stories content from both Instagram and Facebook in one action. 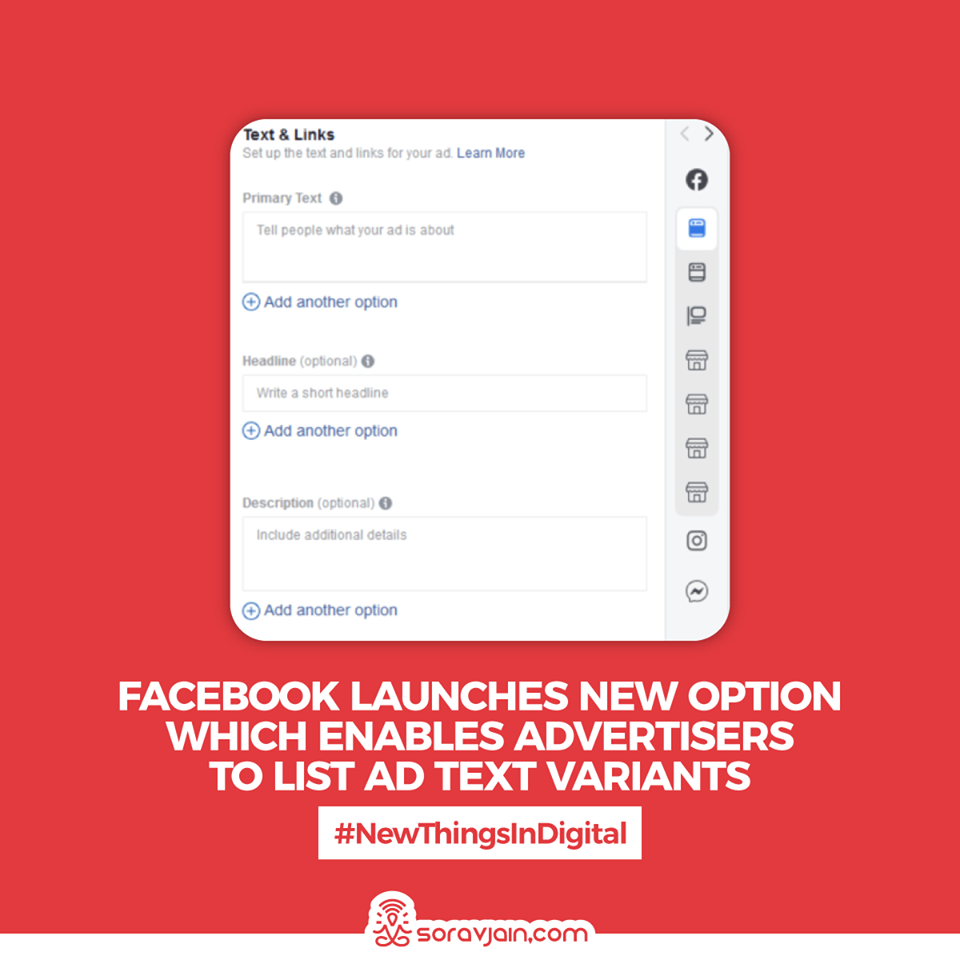 Facebook has added a new option which will enable advertisers to include multiple text variations for their ad copy. Facebook’s system will then be able to choose from the variations when displaying the ad to different users. Snapchat is rolling out a new option which will enable users to paint their own 3D AR effects over their face, or anything else, from within the app itself. The option will enable users to use free form drawing tools, which will then be attached as 3D objects within your frame. You can use the tools in the front or rear-facing camera, enabling you to add new effects to whatever you like. 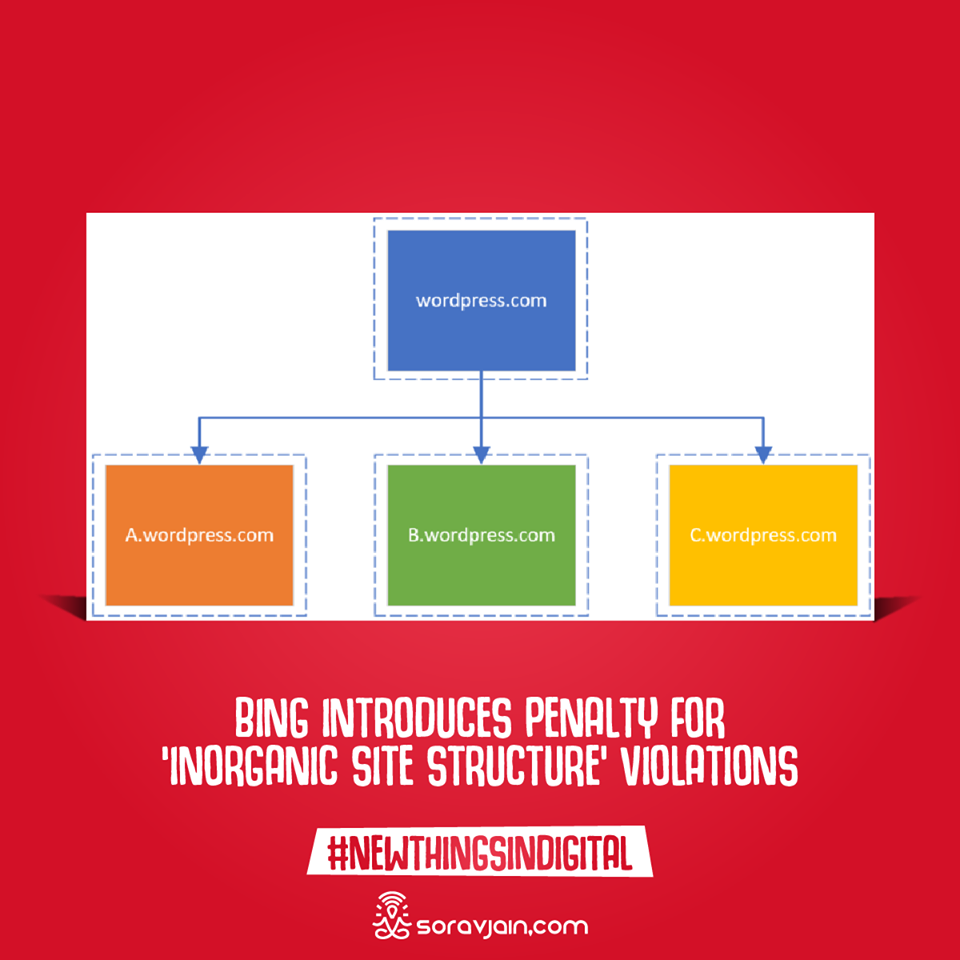 Bing is introducing a spam penalty against “inorganic site structure” violations, the search engine announced on Monday. The new penalty seeks to address tactics such as subdomain leasing, doorway content, and sites that participate in private blog networks. These changes are relatively minor but may save you some campaign management time, particularly if you’re using the newly supported campaign types. Facebook-owned WhatsApp is taking the next steps towards monetization with a new option that will enable businesses on the platform to better showcase their products via the WhatsApp Business app.

Now, brands on WhatsApp will be able to utilize product catalogs in their WhatsApp Business listings, helping to provide more information about, and images of, the items that they provide.

Watch my full video on how to set up and use catalog features on WhatsApp business to increase sales. YouTube is rolling out a new desktop and tablet app update, which utilizes an updated presentation style and provides additional control options. The updated format offers more room for each preview panel, enabling additional context on each from the main screen. YouTube has announced a new test of @mentions within video titles and descriptions, enabling users to connect to other accounts in a more overt, cross-promotional way. That could help facilitate influencer marketing and brand partnerships, generating more exposure for partner brands via the primary listing.

Tagged profiles will receive a notification of the mention, alerting them to the same.
The option is being tested in YouTube Studio Beta among profiles with more than 1k subscribers.

#15. LinkedIn Brings Back Option to Invite Connections to Follow a Company Page 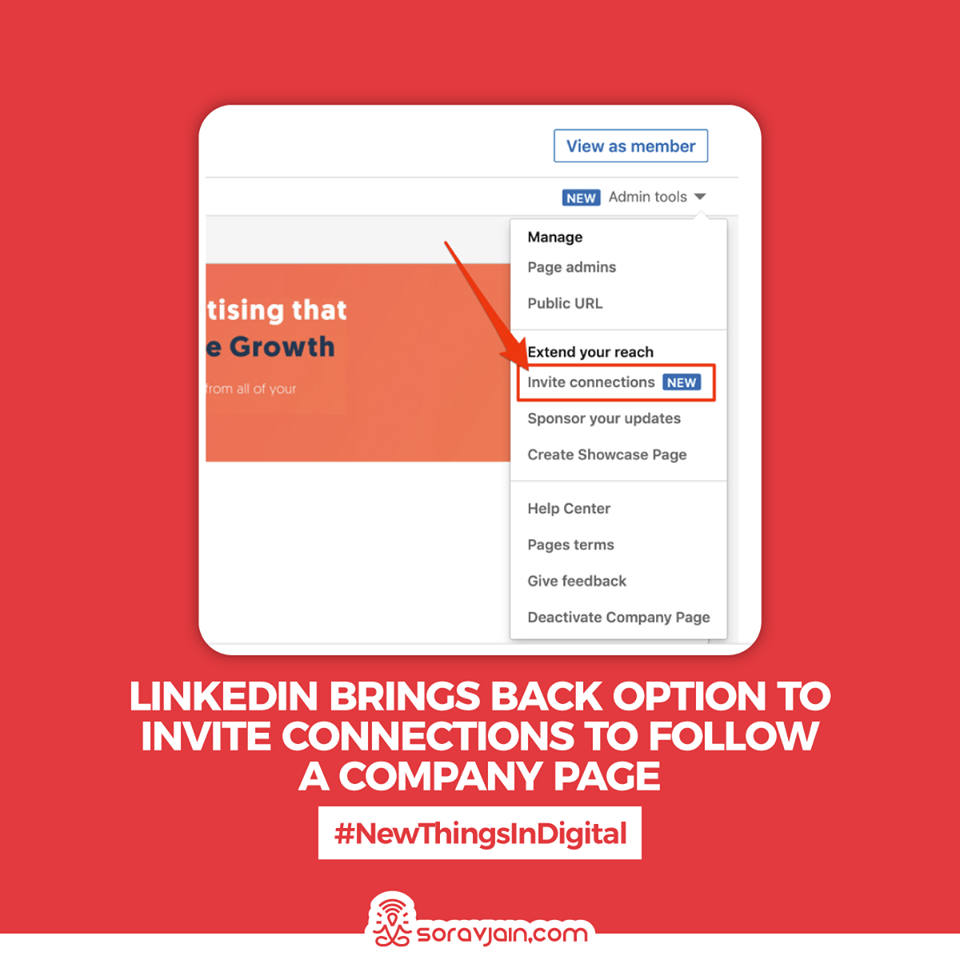 LinkedIn is re-introducing an option that will enable Page admins to invite their connections to follow their LinkedIn Company Page. There are a few restrictions on its use which may help limit overenthusiastic invites. Google has outlined its plans to add new warning indicators in Chrome for both search results and on load screens whenever slow page load speeds are detected. Chrome may identify sites that typically load fast or slow for users with clear badging. This may take a number of forms, and we plan to experiment with different options, to determine which provides the most value to our users Facebook has rolled out a change to its lower navigation bar, in order to better align the displayed icons with the on-platform functions which you actually use. This update also includes a new capacity to change your listed icons more easily, and get rid of those sometimes annoying red dot notifications on each. Instagram is adding its new ‘Reels’ feature as an element within Instagram stories which will enable users to create short videos that can be shared and remixed – just like TikTok. Those videos can include music, utilizing Facebook’s expanding music library, while Reels also includes a range of creative editing options, like variable playback speed and ‘ghosting’ which enables users to create more seamless scene transitions. Daniel Waisberg, a Search Advocate at Google, announced a new YouTube series aimed at training users on how to get the most out of using Google Search Console. The new series will be on the Google Webmasters YouTube channel 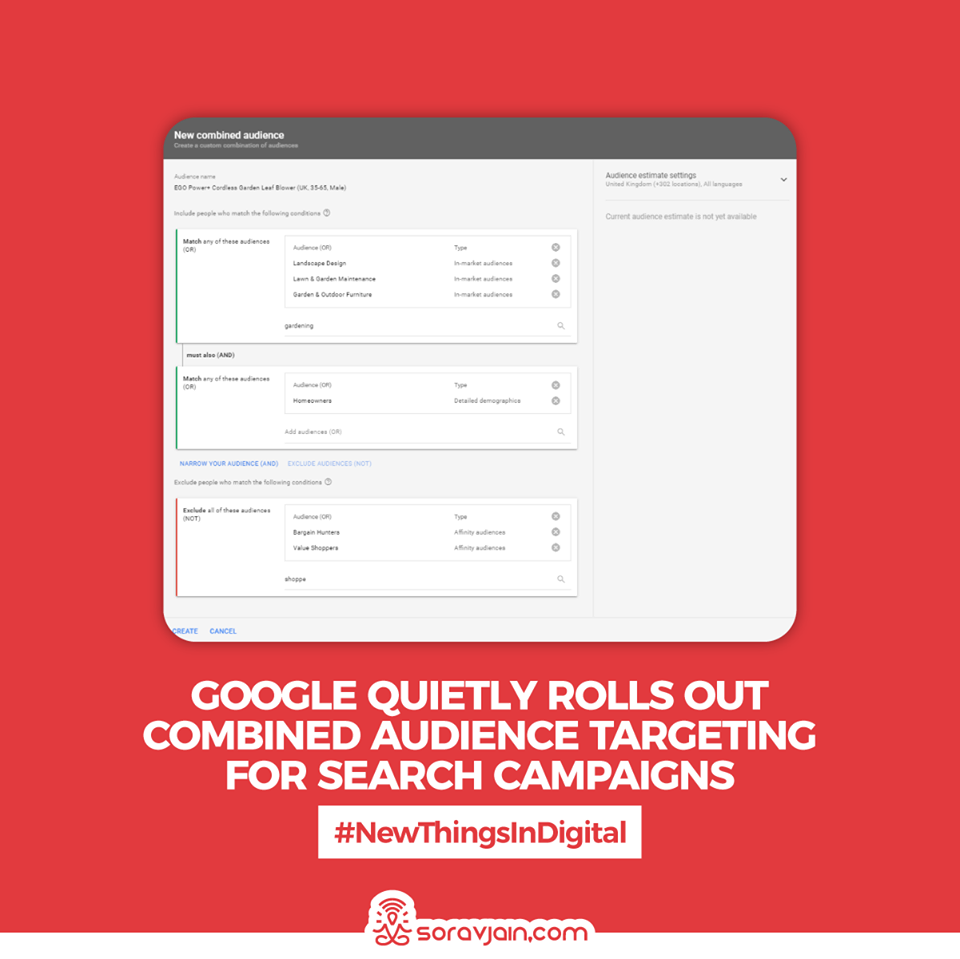 Advertisers are seeing combined audience targeting for search campaigns in their Google Ads accounts. Although Google has not made a formal announcement, digital marketing consultant Steven Johns noticed the new targeting method in his Google Ads account and shared the news on Twitter. 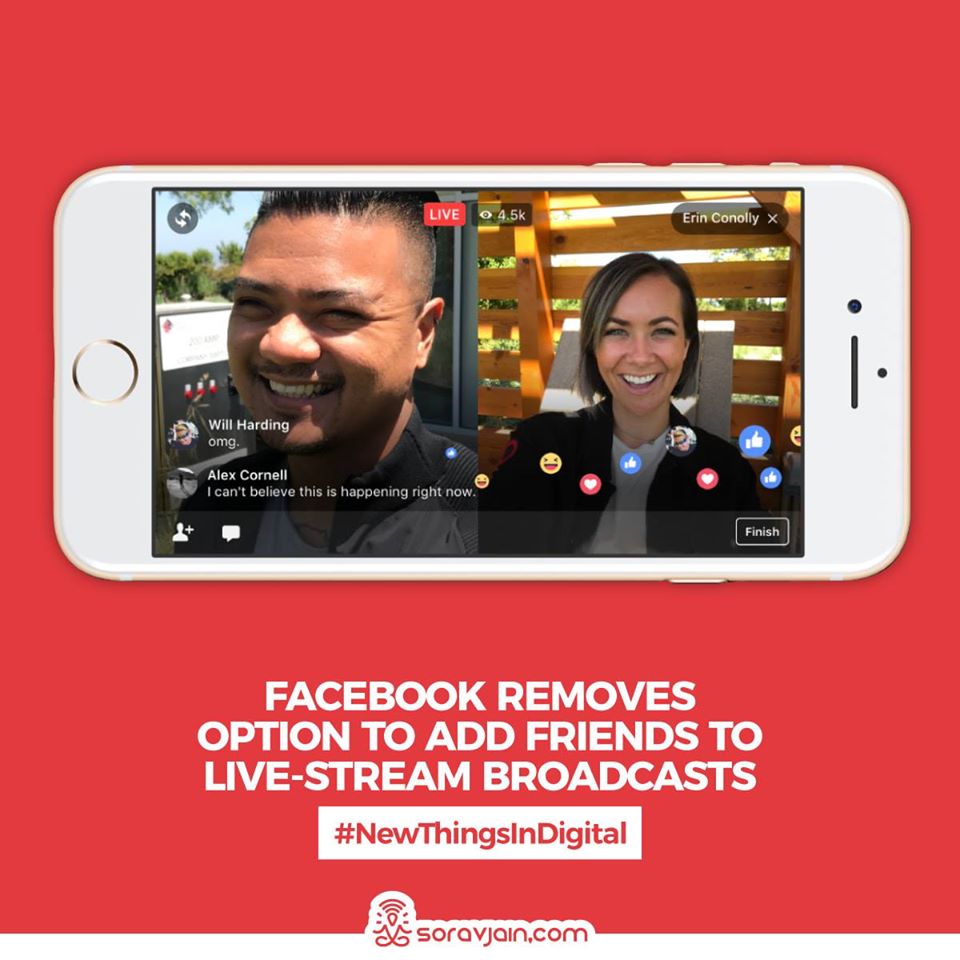 Facebook is shutting down its live-stream with friends feature in the Facebook iOS and Android applications over the coming weeks.  The company found that the price of maintaining a service that could facilitate group streaming was too high, in comparison to demand. Facebook may well have found the same – and while money might not be a crippling concern for Facebook more broadly, it’s not going to keep paying for a service that’s simply not being used. 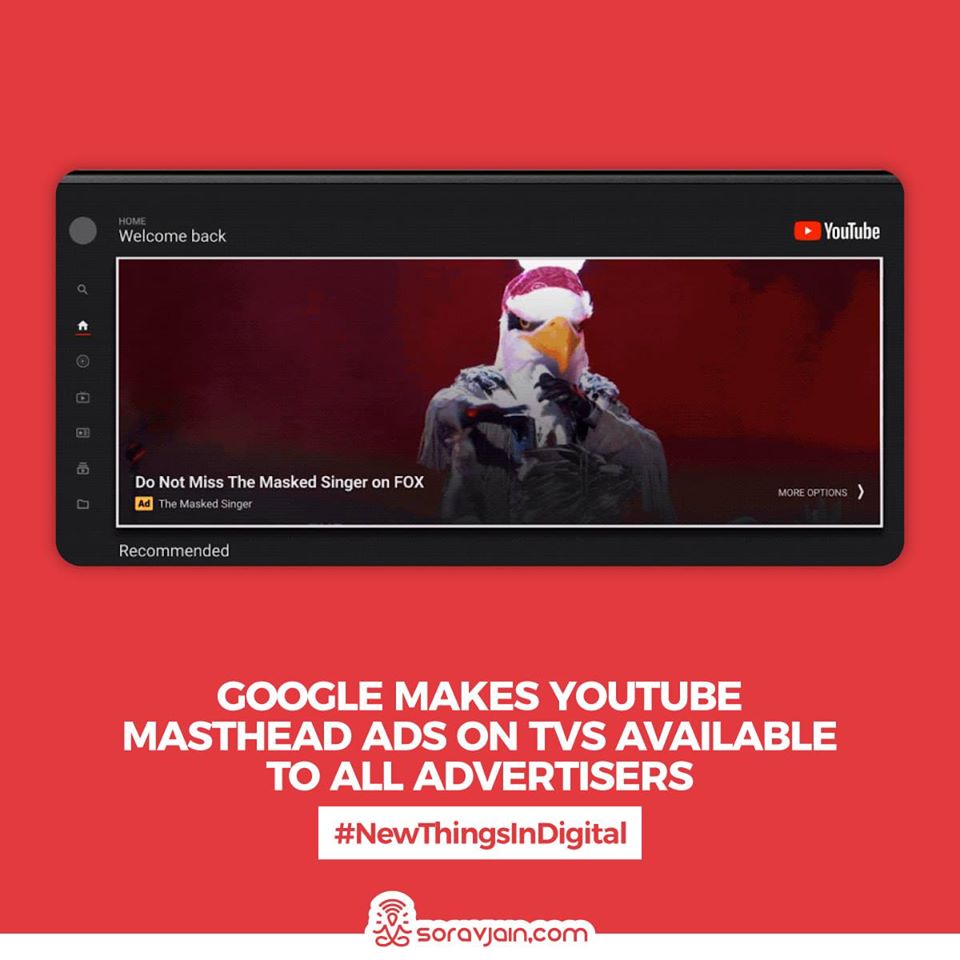 YouTube Masthead ads on TV screens are now widely available for all advertisers to buy on a CPM basis. 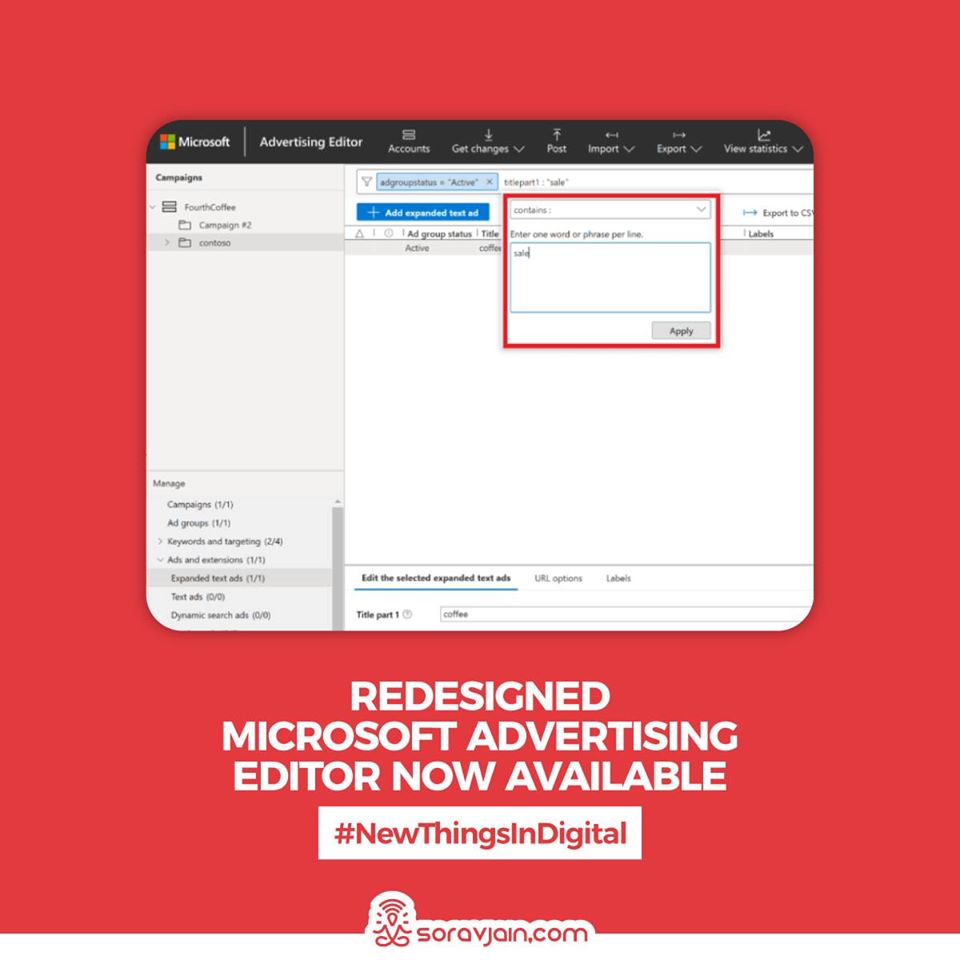 The latest version of Microsoft Advertising Editor has an updated look and some new features designed to make it easier to use. The redesign coincides with a new look for the web interface that’s rolling out. 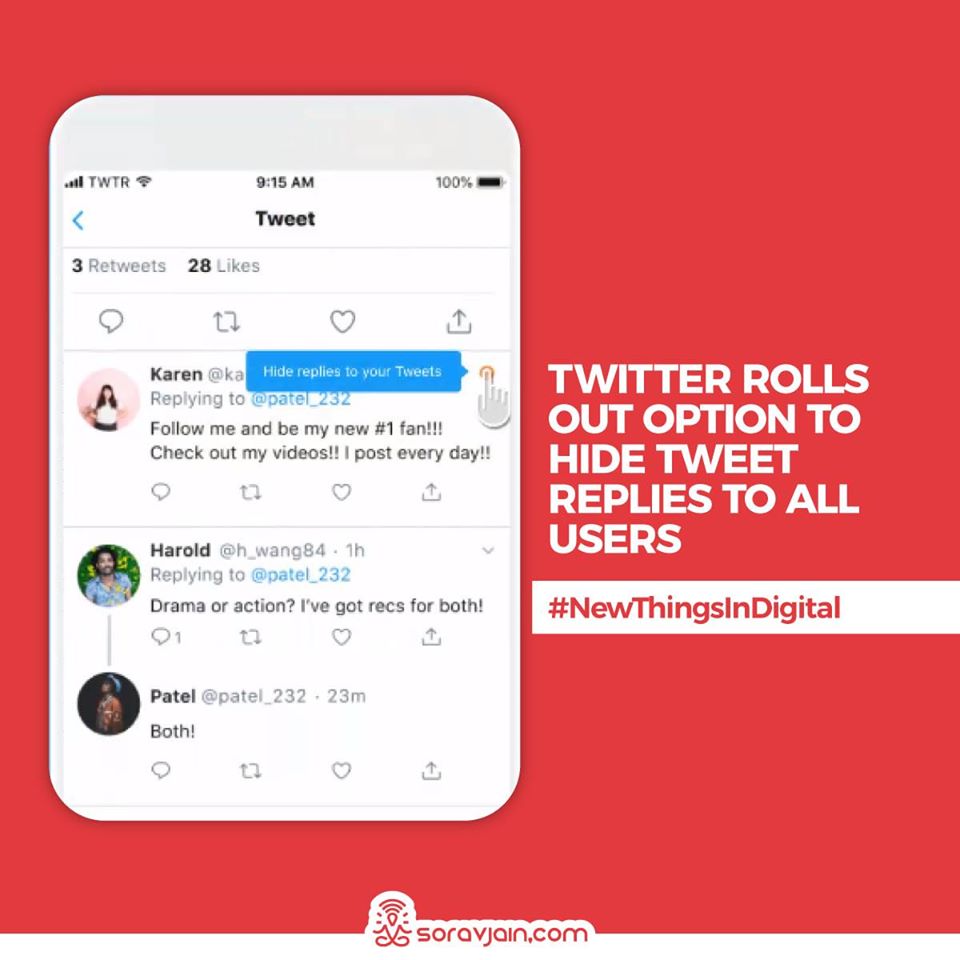 Twitter has now announced that its new ‘Hide Replies’ option will be rolled out to all users globally. Users will now have an option to remove any Tweet replies, and better control your Tweet engagement. 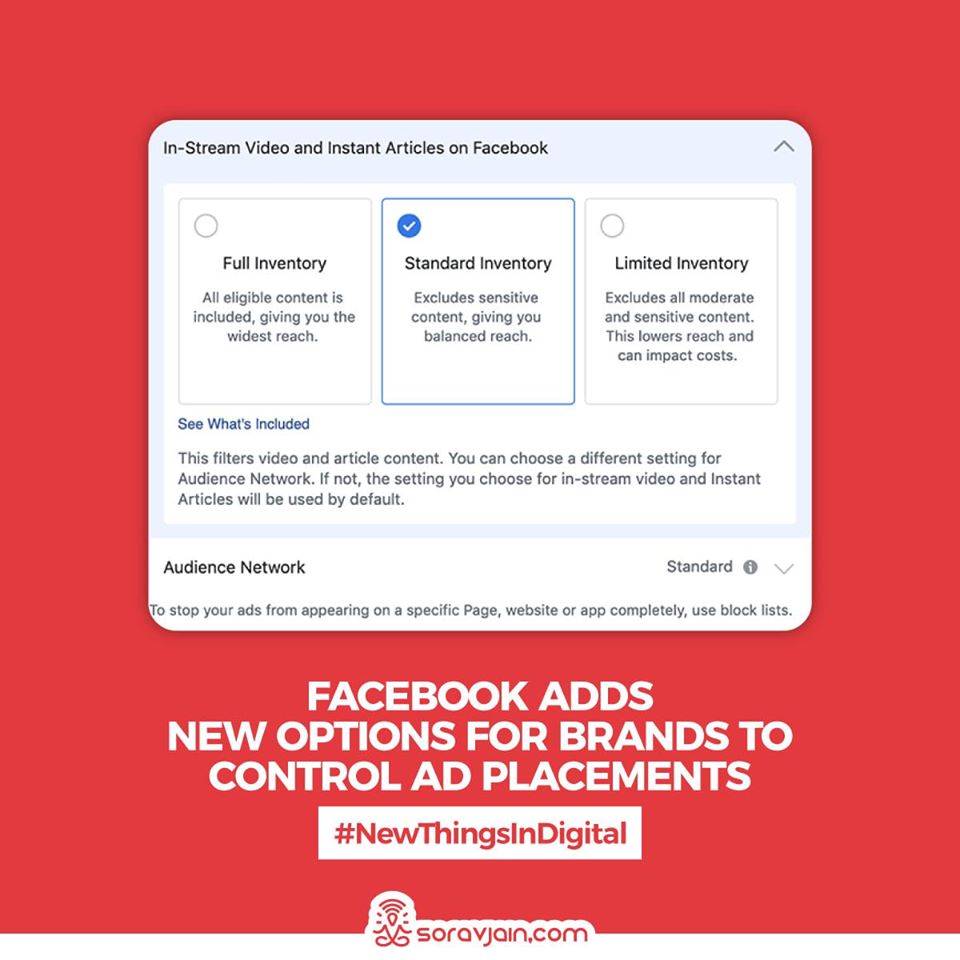 Facebook has announced a new set of brand safety tools that will enable businesses to better control where their ads appear across Facebook’s various ad delivery networks. 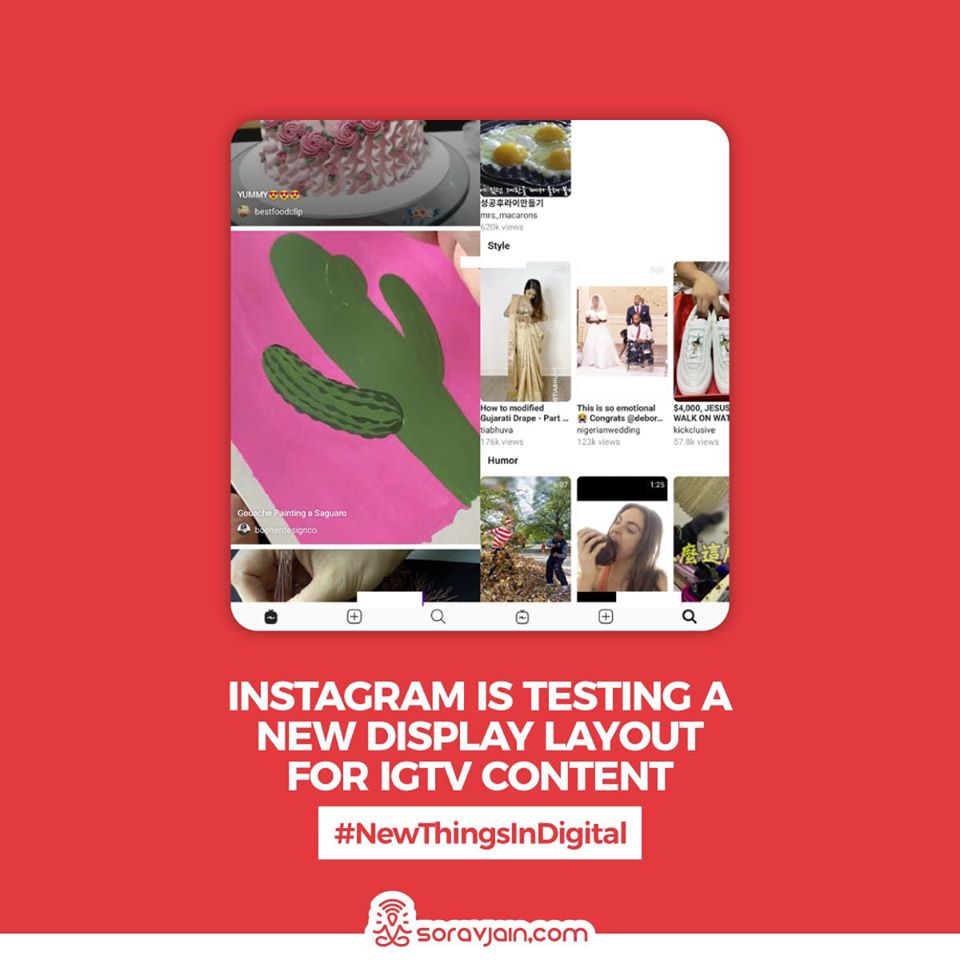 Instagram is working on a new format for IGTV content which would switch your main feed into a vertical scrolling list, leading you through to the next video in the stream. Instagram’s also looking to add categories into your IGTV discovery listings – for comparison, here’s how IGTV currently looks in the app. 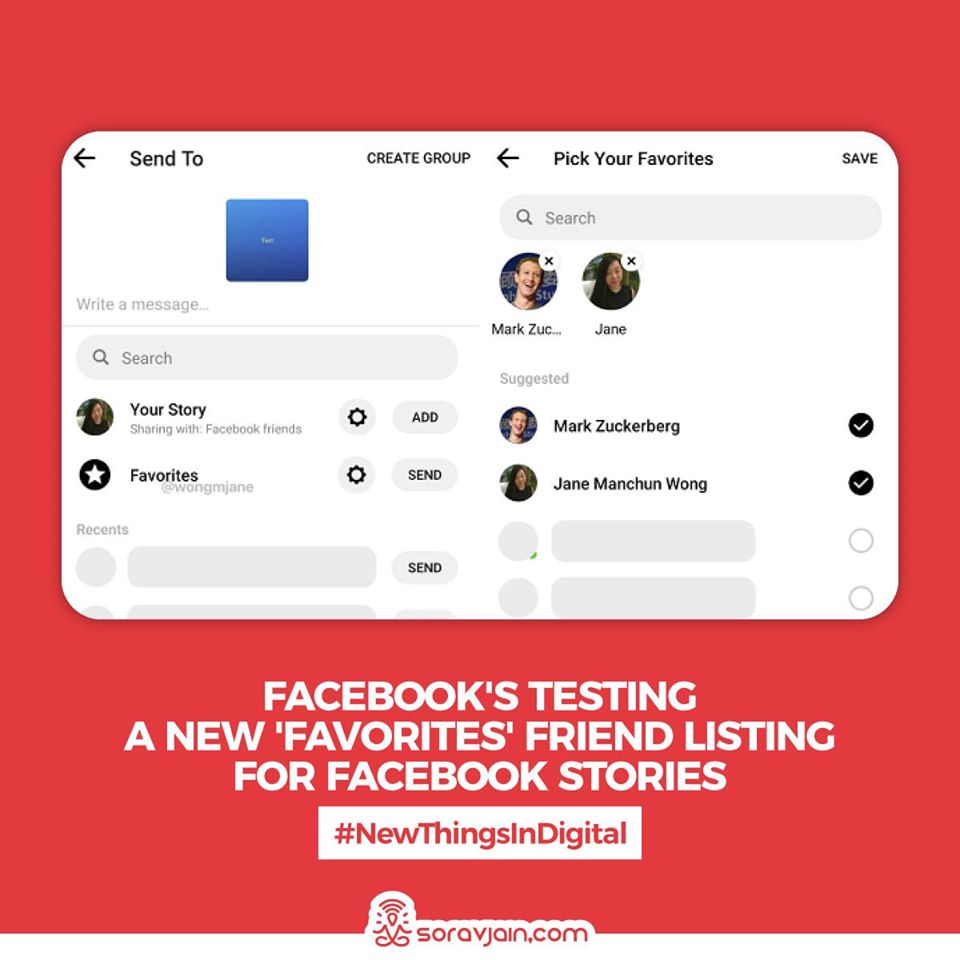 Facebook is reportedly testing out a new option that would enable users to share their Facebook and Messenger Stories with smaller, selected groups of friends, as opposed to all of their connections.