How Social Media got me Cricket World Cup Finals Ticket 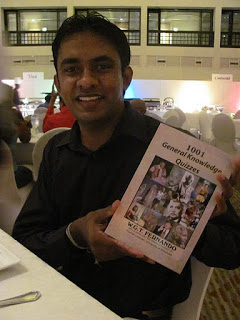 Many have been asking me “How did you get the final WC match’s ticket?” from the time I announced on Twitter and Facebook about me going for the finals. Now, you might be wondering why exactly I want to relate this incident to Social Media?

Or people who know Mr. Krish Srikkanth is my client may think his influence would have got me a Sunil Gavaskar Pavilion ticket. That’s not the fact too. I haven’t approached him for the ticket at all (My goodness ;))

Here the real story is: Few months ago I got connected to Gihan Fernando on Twitter a Sri Lankan who approached me to write a column for his Digit.lk magazine, since then we became good friends and this single connect on twitter got me connected to other potential Social Media connects @amisampath @sharedbysuranga in Sri Lanka and thus that resulted in organizing a collaborative workshop in Sri Lanka and in India.

Two weeks back Gihan pinged me on Facebook and told he is coming for finals and has got two tickets with him. Excited me, pleaded him for one more spare ticket and he responded if his dad backs out for the show he will consider me. On 29th March he confirmed me that his dad is not willing to come and he wants to take me along for the finals.

Its just not that, I had booked the stay for him in Mumbai in a hotel just next to stadium (you can watch the stadium through the room window) and the hotel was referred by someone on Twitter when I asked “Any recommendation for affordable stay in Mumbai, Churchgate, Near Wankhade Stadium?”

Btw, I just forgot to add Gihan got two tickets via his Twitter friend too 🙂

In future me and Gihan are planning to organizing a workshop in Malaysia connecting with other Malaysian Twitter friend of ours @NibrasBawa. Gihan is CEO of GTS a gaming company behind the popular Colombo Ride Mobile game and author of 12 General Knowledge, IT books. We are together planning to write a book soon.