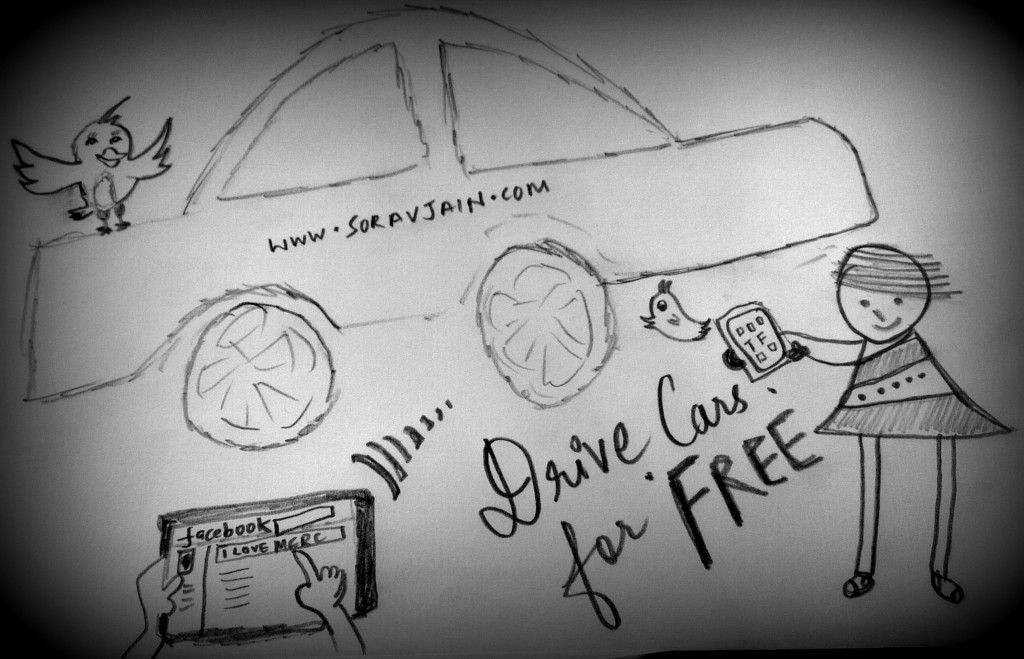 Automobile companies have a different funda on Social Media. Videos and contests with free giveaways have become the norm now.  Like how Volkswagen ran #Anything4Jetta campaign asking people to tweet to win a car – which I am not sure how realistically was won by a genuine twitter user. However, brands either invest in development of expensive application or a flashy video to engage audiences about their new luxury car and very rarely go that extra mile – to engage influencers in hitting the right chord.

Here are a few stories on how the influencers have been exposed to these marketing stunts by receiving cars for a day or two or for long drives to experience the luxury and share their experience on social media channels.

Ford helped Lakshmi Sarath, a popular travel blogger in the country (Lakshmi has received numerous opportunities to travel abroad for free to cover stories on different cultures and tourism before) by letting her drive a Ford car to – Bekal in Kerala from Bangalore. Ford’s intention was simply to give her an experience, not a part of any contest. By choosing Lakshmi, Ford made a Subliminal advert.

The Automobile industry often leverages blogger communities such as a blogadda, indibloggers to reach out to Indian bloggers. Aarti Krishnakumar, an active twitterati , a popular food and travel blogger and an influential Facebook persona was given an opportunity to drive Indica Vista d90 for 3 days. It came with a full tank and liberty to drive wherever.  She later received a Rs.2500 Chroma voucher to redeem. 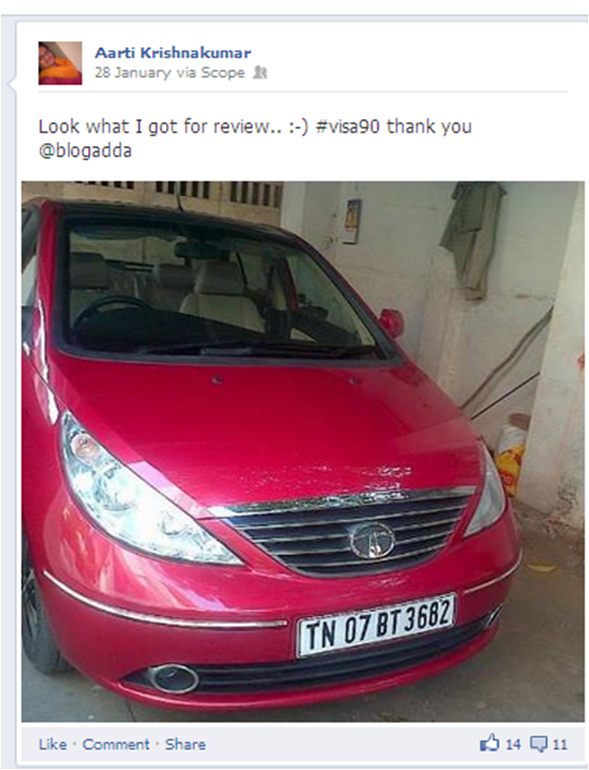 She was one among the many bloggers who were approached to do the same.

*Though people are asked to talk about the car on the web, it wasn’t very convincing.  The excitement of a contest was missing, despite being a “Full Tank” show!

@TinuCherian Lost the Contest, But Still Won a Mercedes Car for a Weekend:

When it comes to luxury @TinuCherian won it all. As part of its promotion, Chetan Bhagat and the #KaiPoChe promotional team ran a business idea contest by asking followers to tweet using #MyKaiPoCheDream. 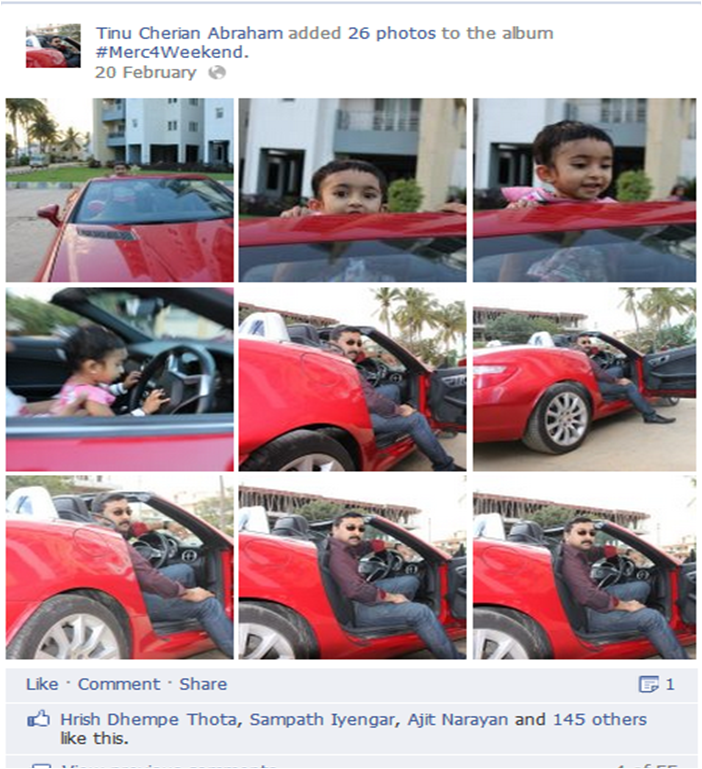 Tinu received the maximum Retweets that shot to the top tweet and trended (with 144 RTs & 52 Favorites – check the pic below). Despite this Tinu lost and decided to ask Audi for a car for the weekend with an exceptionally smart tweet (he tagged Mercedes and Audi in the same tweet – check the pic below). The tweet got him 147 RTs, catching the Mercedes India’s attention instead of Audi’s and hurried to contact him. And sent him a SLK 350 ( 90+lakh worth model?) all the way from Pune to Bangalore, for an entire weekend as requested. Now, that’s brilliant isn’t it?

Tinu did full justice! He shared pictures and the experience of driving a Merc with his internet fan followings.

*However, Mercedes has won some brownie points here. It was wise enough to choose an influential loser  of the contest🙂

@Dhempe gets Lucky with Mercedes as well

Savaari.com (a portal to book cars – for hiring) hosted a Valentine’s Day contest on Facebook requiring participants to post their best couple pictures.  People getting highest number of votes will win a free luxury car ride for a day. @Dhempe had achieved about 132 votes, becoming the runner up and Madhumita Ghosh won by gaining 235 votes. Both won a free car drive. But Dhempe being highly influential on his social media platform, did justice to savaari.com and Mercedes by sharing his experience on Facebook and on twitter, winning a Mercedes E Class! 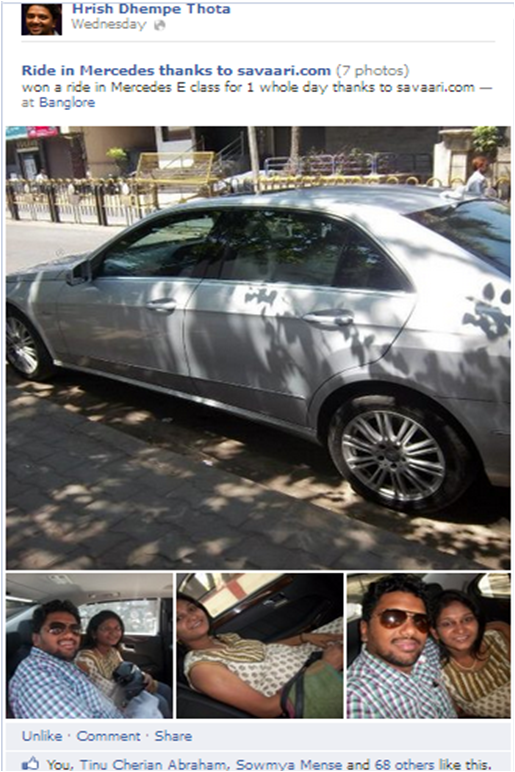 *Photo contests are not incredible but the freebie is worth boasting about and an experience to remember for life!

I received a Cycle and Not a Car

Well, I know this doesn’t go with the title of this post but in a similar case, I had once received an Ampere Electric Bi-Cycle worth Rs. 22,000/- directly from the factory (sent by the CEO) as a gift for me and to promote the same on Social Media Channels. The cycle was a new innovation and a battery operated one, which did get a lot of attention on my Facebook profile. And I got to keep this on 🙂 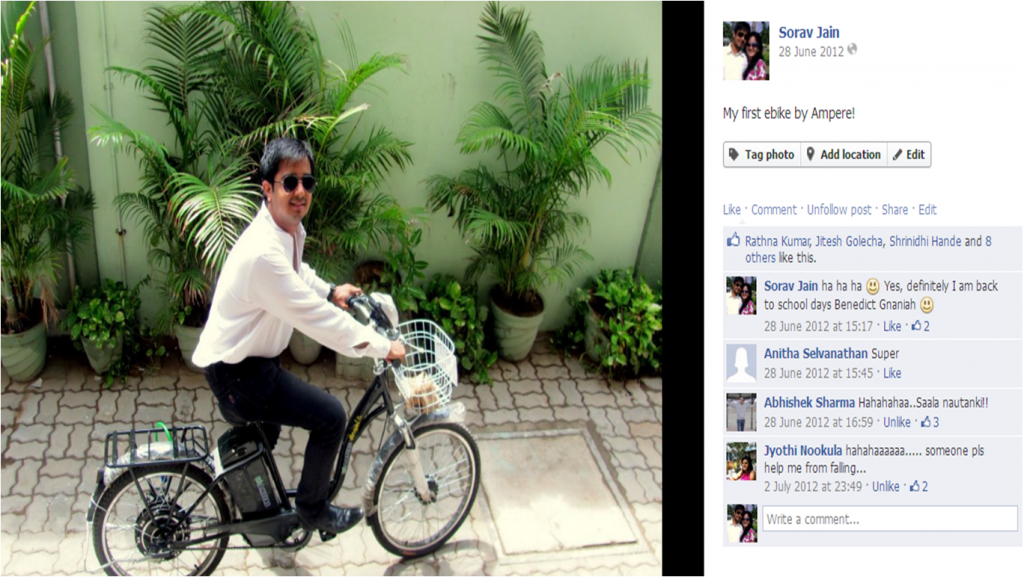 In the past, many brands have attempted free drive based social media campaigns – Tata Grande, Tata Nano to name a few. However, this is all about incentivizing your influencers to talk good about you! The more you incentivize, the more they talk – the more they talk, the larger would be the reach and the fan base.

In all the cases mentioned above the brands are just expecting influencers to talk good about products on their Social Media profiles. Social Media is an immense opportunity for you as a person – start developing your network, start sharing interesting content and start conversing with people on a regular basis and you might be the next Social Media hero to benefit such expensive freebies!

PS: There are many such infleuncers in the country who have benefited from various automobile brands in the similar way. The ones listed above are those whose influential level I am personally aware of.

Pic Courtesy: Cartoon – Hand drawn 🙂 | Printscreens of featured individuals taken from their respective social media channels – Only from the post that were public.