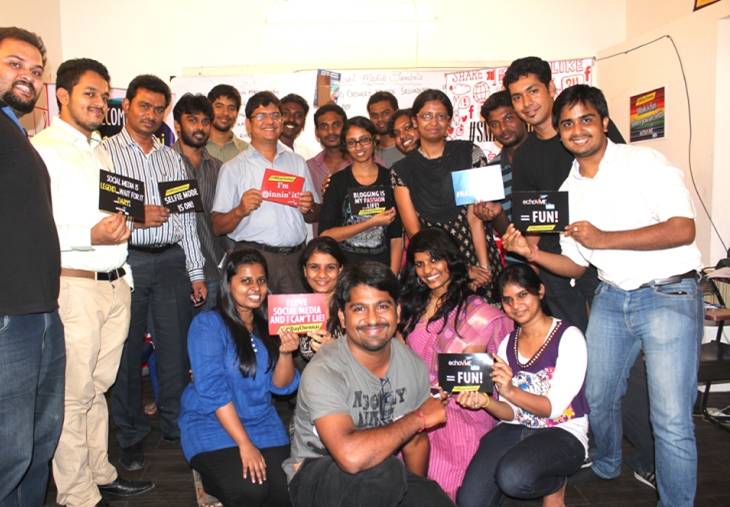 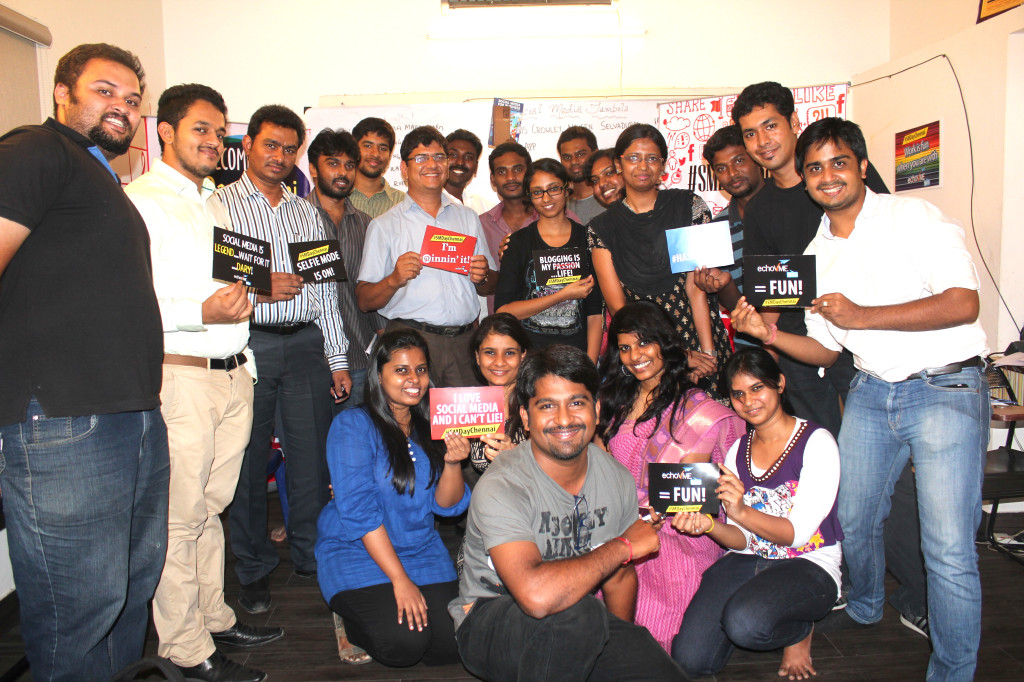 Social Media Day was first recognised and celebrated in 2010 by Mashable.com, a US news and blog site. The tradition has followed till 2014 for the 5th consecutive time, successfully propelling a global revolution that is currently being followed by countries around the world. India too is not far behind.

In Chennai, Social Media Day started with an interesting turn of events. The rain blessed us all with a very generous downpour and helped us set the mood. Conducted by Echovme Digital Marketing services, the day kick-started with an Instagram like option – get clicked at our photo booth but choose a prop of your choice displayed alongside the booth. An assortment of sunglasses, hats and ties were displayed, free to choose. One by one the social media enthusiasts arrived, only to be scurried off to the photo booth!

Enthusiasts present were beginners, experts, students and social media aficionados who could not have asked for a better meeting. After the round of introductions, the fun began. As addiction yielded formidable results, the inevitable question of whether it’s for the good or for the bad was popped. There was uproar and the discussions started pouring in: social media will become a virtual disease in years to come, but hey, how many times has a blood requirement status was shared and saved someone’s life? Alright, then what about cyberbullying, suicides, stalking and the like stemming from social media? Yes but ain’t it the individual’s responsibility to draw the line and think for oneself? During the many power cuts Chennai faces, don’t we all peek into our neighbours’ to check if the power cut is not just our house? Likewise, social media is simply an updated version of peeking into each others’ lives. Don’t you all agree? And what about the many scams that circulate social media? The pretends and wannabees? But hey, aren’t they all haunting us in real life too? But for the shy and socially awkward, social media is the place to be. I can be myself. I have a very active following and have made quite a number of friends too! But…the discussion went on and on! The event was live-tweeted with hashtags #SMDayChennai and #echovme.

The objective of Social Media Day is to educate and engage, too. Social Media Tambola (desi version of Bingo) served well the purpose. What is the profile picture size of Facebook? The first Instant Messaging tool? What’s the 2nd biggest and popular social networking site? Were some of the many questions posed to the audience to be checked off the Tambola box. Thus, some social media giant were also induced in the minds of the audience. The winners were presented with a copy of my book, “Social Media for Business”

But the fun part was yet to begin. Confession pages on Facebook can be passé but not on Social Media Day. The audience was asked to ‘fess up their confessions and their most embarrassing moments. It was no surprise that hacked statuses were one of them, accidental ‘Likes’, public bashing were a notable few.  Social Media for business soon took over the discussion with inputs and doubts.

A quick photo session and feedback was followed by dinner. The night of selfies, tweeting and brainstorming sessions ended with the ideal networking touch, by exchanging of social media identities with promises to connect and network.