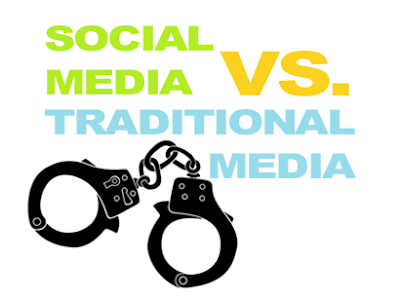 Social media is a new phenomenon. However, since it came to the fore, wars have been raged on figuring out how it measures up to other traditional media like print, TV, radio and so on. Many comparisons have been made and there have been equally compelling points from both sides. Here are a list of issues where you can sometimes compare the kind of reach and advantages the different media have.

· Cost effective: For social media if we were to put down the most important things that you will need they would be access to the internet, some great ideas and a lot of time. Traditional media on the other hand takes money. However, it needs to be said here, that as the social media space is evolving, so is the cost involved in using it as a medium.

· Instantly gratifying: With social media you put it out there and the consumption is almost immediate. People immediately respond to it; they either like it or they don’t. Either which way, you know instantly. Your message and your customer’s response to it, is immediate. However, with traditional media, you can put your idea out there and hope that they have received it.

· Direct talk: In social media the customer relation is more direct. The conversations between you and your customers is one on one. They directly listen to anything that you have updated and respond to it directly with them.

· Crisis management: Sometimes, advertising or communicating through the media can get complicated. If the message is not understood or wrong, the correction of it can be quite difficult. In the case of social media, however, the response will have to run the risk of immediate response. For traditional media, the reflex response is a lot slower, making it easier for you to analyse the entire situation and respond accordingly.

· Flexibility: Traditional media does not the offer the flexibility that is offered by social media. Once an ad is aired or an ad is printed, the imprint is permanent. However, just because of the technological flexibility social media offers, almost nothing is permanent. You could easily put something out and delete it if it doesn’t sound right.

Overall, despite all the discussions that surround this increasingly vocal debate, it must be understood that both these mediums are different and almost mutually exclusive. This means that chances are, for a long time to come, both these will co-exist and will certainly grow together and at some point will all be integrated.

Therefore, instead of trying to see which one is better, focus must be restored on how best to use this new medium along with tradition media to get the most desirable results.