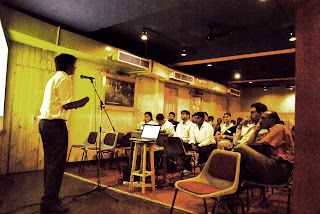 Crowd Introduction: Nearly 70 people gathered for the Social Media Day celebrations in Chennai. To surprise, it wasn’t just the city youth part of this fascinating day but there were house wives, CEOs, students, professionals and other individuals who added a lot of value to the conversational session.
http://www.blogger.com/img/blank.gif
About the Setup: Unwind Centre was the place chose for the celebrations. Unwind centre mark the remark of band culture that swings in adrenaline of positivity in an individual. The setup showcased projector, banner, balcony (seating arrangement) and yellowish atmosphere (that you will notice in the picture below).

Session: The show started with my introduction to the Social Media Day concept and how the growth of Social Networking sites is augmenting in India on daily basis. It continued with a note on how the pure social networking is taking shapes of social business and digital activism. The introduction also explained in detail the concept of ‘Social Media Day the Social Way’.

Social Media Day the Social Way: It is a concept to create a social atmosphere by supporting a cause. In today’s meetup we had three causes registered:

– PETA ( People for the Ethical Treatment of Animals)
– PUNYA (Helping the deprived ones)
– Sharemycake.org

All the three were introduced. PETA and PUNYA were supported monetarily. Sharemycake.org wanted to create awareness and the concept was introduced to the audience. Rs. 4,000/- was collected from the participants of this event that would be divided between two registered causes (PUNYA and PETA).

Educational Factor: We started with 140 character tweeduction of participants, followed by a platform to discuss ‘How Social Media has influenced lives’. Few participants had amazing stories to share relevant to Social Media and Success. The session went on to shape up as panel discussion amongst the strong Social Media users from Chennai. Few questions that were answered in the discussion;

Fun Factor: We had Housie / Lotto game running for the crowd. Random numbers were picked and announced by show stealers Mr. Ram Subramaniam, Ms. Aarti krishnakumar and Ms. Nadhiya Mali (The active Social Media users based out of Chennai). There were 3 prizes / gift for different lines of housie.

Photos of the Event: 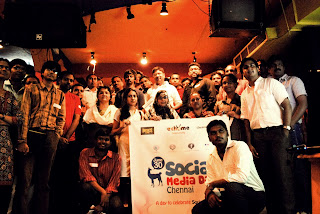 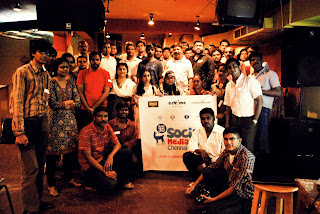