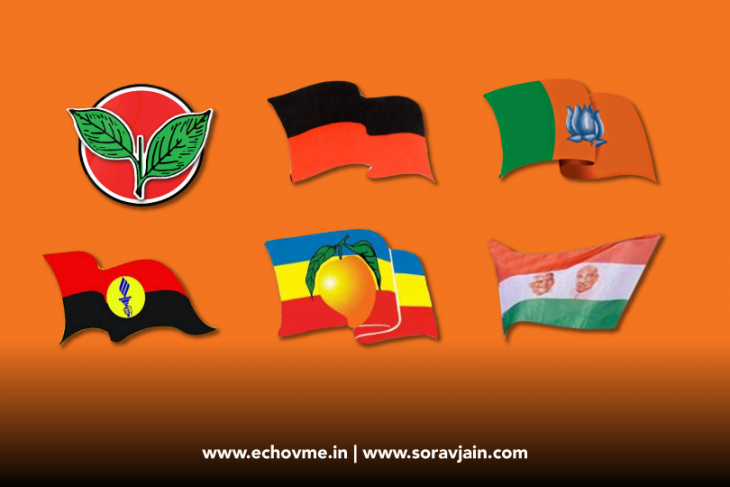 With just a few weeks away from the commencement of Tamil Nadu elections, let’s take a look on how far the parties have come along in therms of their social media strategies and presence. From the month of February and March, in the month of April, there seem to have been a shift in the numbers and performances. As noticed evidently from the internet, the political parties have invested in social media channels like Facebook, Twitter and YouTube.

There is a boom in the digital scenario and it no longer seems to be deserted. However, national parties have already started having social media sessions for their party members and are gradually increasing their visibility in the digital forum.

Click here to view the large version of Info-Graphics

The Election Commission has now finally partnered with Facebook to reach out to 31%of the electorate Tamil Nadu and achieve 100% turn out. Currently in Tamil Nadu there are close to about 11 Million Facebook users of which about 8.4 Million are male users and about 2.6 million are female users in the age group 18 to 65+. On Twitter there are about 8, 77,000 people from Tamil Nadu of which 6, 85,000 are male and 62,000 are female Twitter users.

The BJP TN has been the most active party on social media with ever increasing likes and followers. It’s social media team has been active on the platforms, updating and providing insights into their party and their activities for the upcoming elections.

In the previous month it has out ranked AIADMK by an approximate figure of getting 30,000+ likes on Facebook. At present, it has an outstanding number of likes which is over 9, 00,000. Also, it has left behind all the parties by beating them with the number of likes and followers. The YouTube subscribers of BJP TN have increased to 340 from 134. On the whole, this is a huge game turnover at this point of time.

This was the ruling party for the previously for few months but now it has been pushed to the second position by BJP TN. The likes on Facebook have increased by over 10,000. The number of followers has drastically increased by adding 5,000+ followers to their account. Despite the increase, it has failed to stay in the first position. The party leader Jayalalitha is not available on any Facebook / Twitter account. However, there are many parody accounts of the party leader (they are either maintained by fans or by random people).  While conducting researches the number of subscribers on YouTube was not visible. However, it showed a record of 630 subscribers last month.

The official website of DMK is in Tamil as well as in English which is a brilliant move. This party stands in the third position with a hike of likes on Facebook from 28,559 to 32,304. Parallel to it is the number of followers has also increased from 9,464 to 13,900. The YouTube channel also shows improvement as the subscribers increase by 30 more. This may sound less but it does contribute to a successful strategy. One of the biggest competitive advantage in the digital space is that their website is responsive.

This is an official page launched by the DMK, mainly focusing on promoting Stalin and his social campaigns is at an all-time high with the number of followers on Facebook increasing from 1, 94,495 to 2, and 11,099.   Their twitter page is also highly active with their follower base increasing from 1,945 to 3,110. As a surprise it has been noticed that this party has started its own YouTube channel which has about 311 subscribers as of now. It proves to be a competition to the BJP TN.

The Pattali Makkal Katchi has always been showing a gradual increase but with elections round the corner it needs to increase its social media base. The Facebook likes have increased to 10,490 and its followers to 16,100. The PMK party is carrying out a campaign of ‘Change and Progress with Anbumani’ where they showcase their agenda that promises of changes to come like Decentralization of power, total prohibition of alcohol and rehabilitation for alcoholics and campaigns related to “The Chennai We Want” The party’s core focus has been to promote the party leader for the CM and hence the website ‘www.Anbumani4cm.com‘. The website is clean, responsive and supports both Tamil and English language.

The website is extremely responsive. It uses both Tamil and English. The TMC Social Media is updated with press coverage, interviews, rallies and speeches of G.K. Vasan and information on the party’s alliance decision which is yet to be taken. Hashtag being used is #TMCforTN. We see more Retweets than Tweets. TMC stands last in the list as it shows that the number of followers which stood at 900 has reduced to 899. On the contrary, there has been increase in the number of likes from 9,137 to 10,552.

With the elections being just a few days away and the parties scoring increasing number of likes and followers on social media platforms, it looks like they are up for a head to head competition! Although the ruling party is at the top of this political chain, one cannot just overlook the fact that the opposition is also close behind with just a few hundreds of followers less. With things heating up on the social media front, only time will tell which of these parties campaigns have been the most successful!

Another page launched by the DMK is the Ennamma page, which focuses not on their accomplishments, but on Amma’s failure in fulfilling her promises. With over 5-6 funny and interesting posts posted every day and the number of followers on Facebook increasing from 32, 024 in March to 83, 623 at present, this page sure has kept its audience engaged. The twitter page @EnnammaMoments  has also shown a tremendous increase in the number of followers from 237 to 833, with tweets being made regularly with the hashtag #EnnammaIpdiPanreengaleMa in both Tamil and English. With that brilliant move, they sure have gained a lot of fans in the recent times!

This is yet another page which focuses on bringing down Amma and her team. The number of followers on Facebook has increased from 86, 918 to 1, 09, 688. This page focuses on showcasing the serious issues that plagued the state under Amma’s rule, but with a funny undertone to it, which has proved to be a hit among the audience. The twitter page is also as interesting, with the number of followers increasing from 6, 728 to 10, 100. With over a number of pictures and videos posted every day, this page has definitely left the people wanting for more.

DMDK’s Facebook page has around 16, 662 followers from the previous 12,305. Their twitter page also shows increased fan base, from 621 in March to 1038 at present. The strategy circles mainly around information on party members’ list, images of meetings, appreciation letters, animated posts on policies and campaigns. The posts and descriptions are in the regional language and it has failed to reach the larger audience. There is very less interaction, and it does not reflect the number of followers that the page actually has. This party has definitely lost out in its attempts to win the hearts of the audience through social media.