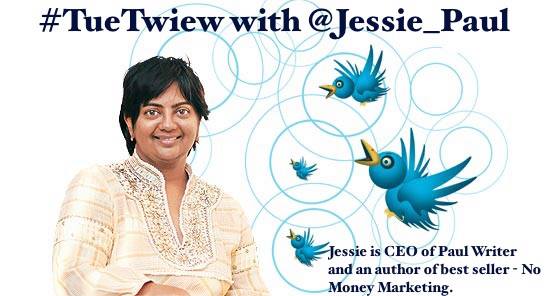 Okay first of all let me confirm again, TueTwiew stands for Tuesday Twitter Interviews. I have personally decided to dedicate 1 hour on Tuesdays interviewing some of the thought leaders in the Indian or Global Social Media context directly on Twitter. #TueTwiew allows people to ask questions directly to the delegate of the evening at the same time they can contribute their thoughts using hashtag. The context of today’s session was Indian B2B Social Media Context with Jessie Paul. Jessie is one of my most favorite Indian marketers, I adore her since my employee days at CMO Axis. Jessie who has previously head marketing and branding division of leading IT companies now owns Paul Writer Marketing Advisory – that hosts some of the most premium marketing events in the country today. Jessie is also an author of best seller – No Money Marketing.

1: Myself: Based on your experience how is B2B Social Media Marketing scenario in India? Are brands really taking it seriously? #TueTwiew

2: Based on above conversation a question from Malhar Barai: How about webinars? Should that be a focus? Example: Hubspot is using it actively for lead generation

3. Myself: Where does Social Media fit in B2B organisation’s marketing mix? What could be possible objectives? #TueTwiew

4. Myself: How & Y is it important to consider Social Publishing Tools such as Youtube, Slideshare, blog in B2B SM context?

5. Myself: Still, isn’t it important 2 be more active on Social Publishing front for a B2B organization? content richness helps?

6. Myself: when it comes 2 social networking sites such as LinkedIn,FB & Twitter which is ur favorite pick from B2B context?

7. Myself: How about Twitter and LinkedIn for creating database and considering it for one to one marketing? Possible?

9. Myself: Many b2b brands have still not claimed their LinkedIn Company Page or are not maintaining the same, your take?

10. Question from Shamrez Zack: Aren’t you disappointed at the lack of integration between LI & Slideshare? Expected them to change the face of B2B social marketing.

11. Question from Malhar: I see G as a important cog in the social wheel. Google is building entire ecosystem around social

13. Myself:  In India are IT companies more prominent on B2B social media space than other industrial and serious sectors?

15. Myself: Apart from @paulwriter which is ur most favorite b2b brand in Indian social media context?.

The session went on for 1 hour between 4.00 PM to 5.00 PM with around 8-10 contributors and many spectators. My next #TueTwiew is going to be on next Tuesday on Social Media Influencers – Indian Context.