On Saturday the 16th, our Facebook and Twitter accounts had one common post from friends; a video of Yamaraj inside people’s car, leaving them baffled.  An initiative taken by Chennai’s Tapas bar Zara’s with the Chennai City Traffic Police, it was made to create awareness for drunk driving. Titled ‘Drink and be Driven’, the campaign’s focus was to remind people leaving the bar of Yamaraj, widely known as the God of death in Hindu mythology and who is considered sacred. Without taking their lives however, Yamaraj blesses them with a ‘Drink and be Driven’ card, prompting visitors to hire a driver to drive them home.

The video, within hours of being uploaded on YouTube clinched up to 85,000 likes and became immediately popular, having gone viral. Eliciting numerous responses,   the initiative received widespread attention and made it to the newspapers and online magazines the next day of the launch. As of 21st February 2013 the video has received about 3,10,347 views | 1,402 Likes | 92 Dislikes | 100+ comments on YouTube and huge support on Facebook and Twitter.The video was first shared on Chennai Traffic Police page which is already popular with 41,000+ fans. The video picked up momentum from there with more than 1,500+ shares | 1,265+ likes | 130+ comments in favor of campaign.

Rathish Subramaniam of ad agency McCann Erickson who conceptualized the ad said the idea was to drive home the point that drunk driving is not safe. Having had to capture the reaction of people coming out of the bar and seeing the lord of death in their car was not a daunting task for Mr.Subramaniam. “Many reacted emotionally and the ones in the video are only the subtle reactions” he added. Having dangerous roads and ones no stranger to those who frequent, Chennai has had 1411 accidents in 2012, the highest in the country.

How did it Help Zara Tapas Bar: 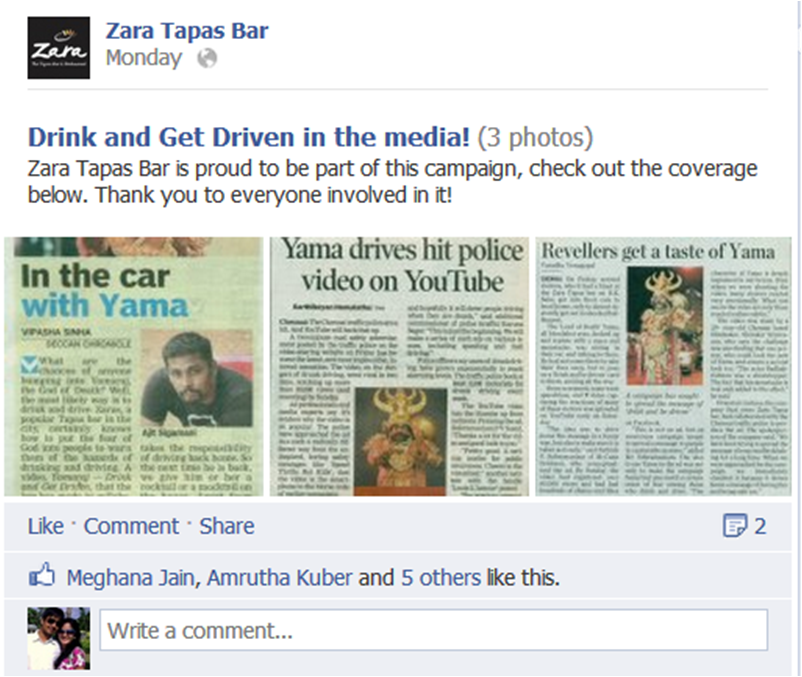 Sometimes, Social Media campaign is not about community marketing or setting up channels it is also about having amazing content and hitting the right chord to promote– The Influencers!

Zara Tapas Bar should have included a strong statement at the end of video that encouraged people to join Tapas Bar on Facebook or Twitter. Example:

“If you drink responsibly, then you are allowed to join us on Facebook.com/ZaraTapasBar” This would have helped them grow their Facebook community.